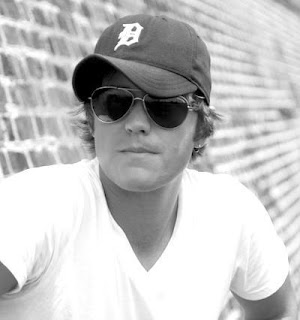 Dan Wright graciously stepped up to the stage to lead our Jams earlier this year, bringing new energy and structure to the event, not to mention musical talent and charisma, Detroit-style. He's not just a Jam Master, though, Wright plays in three different bands right now. Two out of three will be playing at the Dough soon: this Friday, March 27th, The Energy Company, will play; it is made up of Wright and two other Tuesday stars--bassist Dave Jones and drummer Greg "the Motor" Levkus. On May 1, Tinfunk will play.

Wright describes the Energy Company as "a fun project that came out of Tuesdays at the Dough. I try to play as much as I can because there’s always something to learn." And Tinfunk? "Tin Funk is a funk jam band; I play guitar. Tim Hodson, the vocalist and lead guitarist, is a really good musician. The band, especially Tim and I, are on the same page musically. It’s really incredible when you realize that the other guys are hearing and feeling the same thing that you are. Learning how to be part of a jam, turn it into something that people can identify with, get into is a lot harder than it seems. It’s a great feeling to get into a jam, just let it go, and know that the guys will be right there when it comes back."

Did anyone influence you to start playing music? "I can’t say one artist got me really excited about playing music. It's always been my thing since l started playing at 6, and I haven’t really wanted to do anything else. My cousin played drums and, to me, that was the greatest thing ever. My parents bought me a blue sparkle drum set. I played drums in junior high and high school. My dad took me to tons of shows: Clapton, Stevie Ray Vaughan, Jeff Beck, Average White Band, B.B King, Robert Cray, Bob Dylan, the Allman Brothers, James Cotton, Johnny Winter, Scott Holt, everybody. When I was 16, he took me to play in bars. I played in several bands and I started doing blues gigs at 17. My first one was at the Elbow Room Lounge (Ypsilanti) with Shed Davis. He was certifiably crazy, telling me my horoscope within the first five minutes of our conversation. There was a brawl later that night, the cops showed up, a lady kept trying to buy me drinks. I switched to guitar about a year later, I started going to blues jams like the Tap Room (Ypsi), found some guys to play with. These gigs weren’t glamorous, but I learned a lot about life and met a lot of interesting people."

Did you have a favorite musician back home? "Laith al Saadi was an unofficial (and often reluctant) mentor to me when I was younger, a lot the way that I play guitar comes from him. Laith has the level of (continued on page 2) (continued from page 1) musicianship that I’ll never have. He’s also a fantastic singer/songwriter, and probably the best guitar player that I’ve ever seen. Earlier this decade, Laith played every Thursday night at Goodnight Gracie’s in Ann Arbor. Al Hill--another Ann Arbor phenom--was a world-class piano player and singer, he was the keyboard player. That band was just unreal! I remember thinking how lucky I was to see these guys for free every Thursday night. "

Do you write? "I do write songs, but you’ll never hear them. I’m hypercritical and impatient, it isn’t a good formula for writing songs. I’ve found that I’m a lot more comfortable just being a guitar player. Even from the beginning I’ve always played in bands that improvise most of the shows, so writing parts and stuff is kind of difficult for me. No real plans to record anything soon."

What inspired your move to Charleston? "I discovered Charleston on tour with Detroit's Gordon Bennett band, I was a sideman. The tour was designed to generate interest in the Southeast and prove to the management companies (and potential record companies) that we could live in a van and not kill each other (we almost did).We’d finished recording two songs with producer Chuck Alkazian at a Novi, Michigan studio. We’d played in Ohio, Atlanta, and two nights in Wilmington, NC. I met a girl there from Charleston I was immediately crazy about. We got back to Michigan and learned our manager (at Denver, CO Clear Channel) didn’t like the demo and wasn't going to promote it. The band fired him, and planned a tour from LA to New York. I faced a choice to join them, or finish college. I graduated from Eastern, packed my stuff and came here."

How is Detroit different from Charleston? "There are venues dedicated to music up there: Baker’s (on 8 mile) is an old school jazz club, Firefly (Ann Arbor) is a blues club, the Magic Stick (Detroit) is a rock club. In Charleston, the scene is really heavy on duos, trios and cover bands because it’s a tourist destination. Seems like in Detroit, people will go to a venue specifically to hear original music."

Who would you really like to play with? "Marc Broussard. I’d love a chance to play with him. That’s pretty much my dream band. Put in a good word for me."

Wright's other project, Soul Captive, will be recording a live CD at the IOP's Windjammer on April 16th. The band wants to fill the place up for a good audience vibe. The first 15 in the door will get a free copy of the CD when it is pressed.