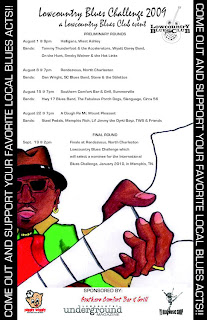 At left is a JPEG version of the Lowcountry Blues Club poster, at 52% scale. Sammy Derrick provided the illustration of the guitarist, and Kathleen Wehle did the layout and design.

The itinerary for the festival is as follows:
August 1, next Saturday at Halligans, starting at 9pm, Tommy Thunderfoot & the Accelerators, Wyatt Garey Band, On the Hunt and Smokey Weiner and the Hot Links will compete to win the first round.

August 8, the following Saturday at Rendezvous American Grille, starting at 7pm, Dan Wright, SC Blues Band, Steve & the Stilettos will compete to win the second round.

August 15, three Saturdays from now at Southern Comfort Bar & Grill, starting at 7pm, Hwy 17 Blues Band (Jack Downey's band), The Fabulous Porch Dogs, Slanguage, and Circa 56 will compete to win the third round.

August 22, four Saturdays from now at A Dough Re Mi, starting at 7pm, Steel Pedals, Memphis Rich, Lil' Jimmy the Dyrti Boyz, and TWS & Friends will compete to win the fourth round. At this point in the festival, we will have our four finalists for the finale.

The Finale is Sept. 19th, at Rendezvous American Grill, starting at 2pm. Whichever of the four finalist bands wins this round will be the nominee from Lowcountry Blues Club for the 2010 International Blues Challenge in the Blues capital, Memphis, TN.

The links above allow you to check out the bands for what's in store, and locate the venues if you don't know where they are, and learn more about the International Blues Challenge. It's really exciting for the Lowcountry Blues Club to be able to put on this very first Challenge with the help of sponsors Piggly Wiggly, Ye Olde Music Shop, Southern Comfort Bar and Grill, and Lowcountry Underground magazine.

In the first week of August, Lowcountry Underground Magazine will feature an article about the club and the contest, with a few photos from the Jams we've had in the past.

Until next time, have fun and be safe.